What we have found throughout our travels is that it is the off-the-beaten-path locations that tend to mean the most. Those are the locations that stick with you when you are back in your den reminiscing. Why? The culture. The people. The history. So, while it’s fantastic and magical to travel to larger foreign cities, don’t overlook the ones that will enchant you the most. Rothenburg is one of those places.

Officially referred to as Rothenburg ob der Tauber (There is more than one Rothenburg), the name translates to “Red fortress above the Tauber”. Located in the Bavarian region of Germany, Rothenburg is part of the Romantic Road and serves as the ideal picture of a town in old Germany. It’s a train ride from Munich. Close your eyes and picture it. That’s it. Or, picture Germany at Epcot. Rothenburg is the real thing.

You may recognize it. Rothenburg served as inspiration for the village in the Walt Disney movie Pinocchio. It was the location for some of the village scenes in Chitty Chitty Bang Bang.More recently, filming was done in Rothenburg for Harry Potter and the Deathly Hallows Part 1 & 2!

An entire book could be, and has been, written about the history of the town. Suffice it to say it’s really old. While it’s older than what we can see today, the buildings standing were constructed in 950AD. The walls are original, and you can walk across the top of them! This is such a rarity in region that has seen so much war and turmoil.

There are many legends surrounding the reasons why the original walls still stand. One story that seems to have the most truth to it is that during the 30 Years War, Rothenburg was under siege. The leader of the opposition, Count Tilly, said if anyone could drink 3 ¼ liters of wine, he would spare the town. The Mayor of the city stepped forward and drank all the wine. Tilly kept his promise and spared the city. Later during WWII, the U.S. Assistant Secretary of War understood the importance of the town’s history and ordered that no artillery be used while taking the city. To this day, you can see the original Rathaus, or Town Hall, standing proudly.

For these reasons and more, we are now able to walk the city streets and feel like we have stepped back in time. While small, the town is filled with shopping, sights, and, most importantly, amazing and authentic Bavarian food! 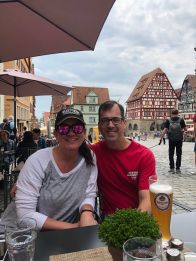 They are also famous for their handmade Christmas Nutcrackers. This is a purchase that you would never regret.

The people, some in authentic lederhosen, are kind, and the town is the definition of quaint. Please do yourself a favor and add this unique experience to you list. I’d love to get you there!

Dena Selvey has been with Once Upon A Vacation for five years. Dena and her family visit Disney at least once a year. Some of Dena’s favorite travel destinations include London, Rome, Germany, Norway, Sorrento, New York City, Chicago, and all places Caribbean. Contact her at dena@onceuponavacation.com to help plan your next adventure!